Picking the right knives for your kitchen can be intimidating. Chef knife, boning knife, or tomato knife? And, what is a paring knife used for, anyway?

Stealthy and underestimated, paring knives can almost do it all! If, that is, you know how to use them.

What Is A Paring Knife Used For?

While some knives have a specific and fairly obvious function (think: a cheese knife), some are multi-function workhorses that every chef should have in their kitchen. But just like Batman with his utility belt, a paring knife is the "bat tool" you need for your own kitchen gadget collection.

A paring knife is used to prep food. This prep work can include dicing or chopping ingredients for a recipe. Or, you can use a paring knife to prep garnishes (like creating a radish rose for a salad or even chopping a simple lemon slice to top off some fish).

Often, the answer to, "What is a paring knife used for?" is things that we just do with our hands, like peeling an apple. This is opposed to tasks that require getting out a chopping board, like dicing an onion.

While you generally use a chef knife to slice and dice, sometimes grapes, herbs, and other small items are better chopped with a paring knife. It’s easier to move the small paring knife with precision. This means cleaner cuts and prettier food.

Also, because you have more control over a paring knife, you’re less likely to lose control of small items (like said grapes).

What Is A Paring Knife Used For? Yes,
There's More!

Sure. A paring knsife is small, which makes it the perfect choice for smaller jobs (like slicing grapes). However, just because it’s small, doesn’t mean paring knives aren’t versatile.

Paring knives are fantastic, all-purpose kitchen tools that do more than chop grapes. So, what else is a paring knife used for?

I find vegetable peelers a pain. I angle the blade right and still destroy whatever I’m peeling. Plus, I always end up with a giant pile of tiny scraps at the bottom of my sink.

When asking what is a paring knife used for, peeling vegetables is one of the top answers!

With the paring knife, you’re able to loop around the lemon in one continuous stroke. There’s no way to do that with a vegetable peeler. You’re stuck making short, scraping motions to get the peel off.

Sometimes you need to do something delicate on a small piece of fruit. For example, if you want to hull a strawberry (meaning, get the green part off), you should use a paring knife for this tender task.

So, what is a paring knife used for, you ask? Well, paring knives are small and easy to handle, allowing you to grasp the food in one hand and strike with surgical precision with the other.

While you could take any knife and make a straight chop across the top of the strawberry, you’ll end up creating more waste (and enjoy fewer strawberries!). Instead, use the sharp tip of the paring knife to “dig out” the stem.

Take the knife tip and slide it into the berry, close to the stem.

Cut around the stem then pop it out. Viola! More strawberry to enjoy.

When a recipe calls for a small yet sharp cut, the paring knife is the only knife for the job.

You can use the sharp tip to cut openings in your pie crust. Or, use your paring knife to score the surface of your meat lightly. The sharp tip and thin blade are perfect for these tiny precision tasks.

Sometimes a recipe calls for fruit segments. The problem is, you don’t want to serve your orange slices with the rind still on them. And that’s where your paring knife comes in.

Use the thin blade to gently peel the rind off each segment of fruit, leaving you with perfectly pretty (and tasty) citrus pieces.

More importantly, using a paring knife lets you keep each piece intact, so your fruit segments remain segments, and don’t end up as fruit bits.

A paring knife is used for lots of things you probably never thought of. You can:

And, that’s not even remotely everything that tells you what is a paring knife used for. It is, if I may say so, a miracle kitchen tool. 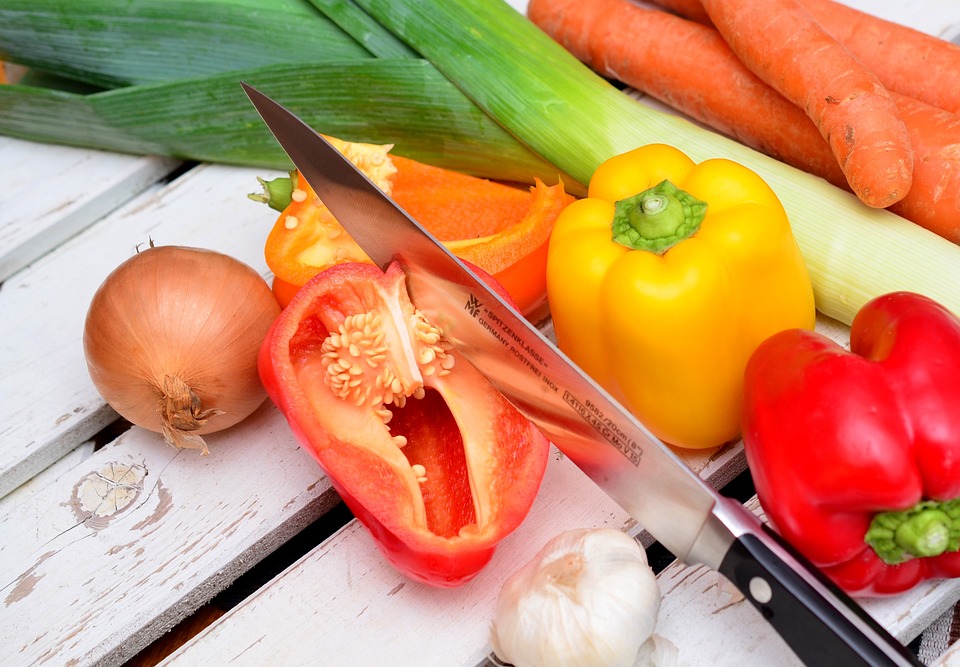 Image by congerdesign from Pixabay

Now that you’re convinced you need to have a paring knife (or maybe three or four!) in your kitchen, you want to know how to pick the perfect paring knife.

Unlike many kitchen tools, when it comes to paring knives, there are only two things you need to worry about.

A paring knife blade is between 3 and 3.5 inches long, though a few are as long as 4 inches. Any longer and you won’t have the control you’re looking for.

Also, it won’t technically be a paring knife.

More importantly, you want a flexible knife blade. By “flexible,” I don’t mean “bendy.” I mean, you need a blade that is small enough to get into tight spots (like a strawberry stem that’s hidden under a bunch of leaves).

But, the same blade should also handle peeling the bumps and curves of, say, a potato.

The right paring knife is one that you can maneuver and manipulate under various circumstances. While there’s nothing like a road test, that may not be possible to do in the store. In that case, the next best thing is to test the handle grip.

You want the handle to rest comfortably in your hand — not only when you hold it but also when you’re chopping, peeling, and slicing. The handle should move smoothly in your hand.

With the right handle, you can quickly and easily change your grip, so you’re able to perform multiple tasks without discomfort.

What About A Santoku Paring Knife?

Perhaps you’ve heard of the Santoku vs. chef knife debate and are wondering if there is a Santoku knife vs. paring knife debate. Well, maybe.

A Santoku knife is all about the blade. A Santoku knife edge is scalloped, which lets air in between the food and the knife blade. Some people feel this makes it easier to cut the food.

Also, because you have more control over a paring knife, you’re less likely to lose control of small items (like said grapes).

However, on Santoku-style paring knives, you won't find the scalloped edge. You may find that the cutting edge of the blade is thinner than the rest of the blade, but it’s one solid line. Does this solid line make it easier to cut things? Maybe.

What Is A Paring Knife Used For?
Practically Everything!

Image by Werner Heiber from Pixabay

Clearly, this tiny knife can do the lion’s share of work in the kitchen. From slicing and dicing to creating delicate ribbons and curls, the paring knife can do it all.

What do you think? Are Santoku paring knives better than traditional paring knives? What cool things have you done with a paring knife? Sound off in the comments below!

What Can You Cook in a Toaster Oven? A Mouthwatering Guide

Why is My Cast Iron Skillet Sticky? The Answer and Remedy That Works